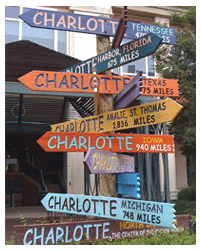 More than 250 years ago, Scottish and Irish settlers were following a couple of old Catawba Indian trading routes. Where the paths crossed, the settlers stopped. And Charlotte began.

Today, things no longer happen in Charlotte by accident. Rather, we’re a city of purposeful newcomers — many of them individuals who compared Charlotte to their current address and said, “Let’s pack up the moving van.”

Through careful planning and gradual development, we’ve emerged as one of the South’s — and one of the United States’ — premier cities. Today Charlotte is one of the 20 most populous cities in the country, a big climb from 35th place in 1990. There’s a reason so many people from around the world now consider Charlotte home. Come discover Charlotte for yourself.

TopIn The Middle Of It All

The Carolina Piedmont, an area of lush, green foothills, stretches right down the middle of North Carolina. And here, at the southernmost tip, lies Charlotte, the seat of Mecklenburg County.

Charlotte gives you the best of many worlds. The beautiful Blue Ridge Mountains are two hours to the north. The Atlantic beaches are three hours to the south. The city’s high quality of life, below-average cost of living, abundant career opportunities, world-class arts and major sports attract talented individuals from around the globe.

Our climate is a big part of our allure. You won’t find extreme weather here; rather, mild winters and short summers. Luxurious and long autumns and springs. Four distinct seasons with an over-abundance of sunny days and our famous Carolina blue skies throughout the year.

The Queen City has such a pro-business environment that more than 325 of Fortune’s top 500 companies have placed one or more facilities within Mecklenburg County.

There is so much good news about doing business in Charlotte. Charlotte is the center of the nation’s fifth largest urban region, a position that offers countless opportunities to the companies doing business here. Recognized as a financial, distribution and transportation powerhouse for the entire urban region, Charlotte has developed into a major wholesale center with one of the highest per capita sales in the United States, ranking 6th nationally.

Home to Bank of America, the city is the second-largest U.S. financial center (behind New York). Mecklenburg County also is North Carolina’s largest manufacturing county. Every major manufacturing sector is represented here, including aerospace and defense equipment, industrial machinery and metal working industries, computer and electronic products, consumer goods and bio-medical facilities. Through the years, Charlotte has become a magnet for research and development and technology companies.

Charlotte’s rich business base is served by an excellent state and federal highway network, including major north-south and east-west interstate arteries, as well as a modern, expanded international airport terminal.

One of the first things you’ll notice about Charlotte is the beauty — and diversity — of our neighborhoods. From high-rise and high-style downtown living, to stately brick homes nestled beneath 80-foot green canopies of maple and oak leaves, and lakeside homes on the shores of Lake Norman and Lake Wylie, to condos a short walk from Charlotte’s new commuter light rail lines. Whatever your preferred lifestyle, Charlotte has a home and neighborhood sure to be the perfect fit.

Knowledge drives innovation, and higher education is key to any city’s future strength. Charlotte is home to 30 colleges and universities, including the University of North Carolina at Charlotte, the fourth largest university (and the fastest growing campus) in the 16-campus University of North Carolina system; Davidson College, one of the nation’s most-prestigious private colleges; and Johnson & Wales University, a nationally-renowned culinary school.

Charlotte boasts Johnson C. Smith University, a private liberal arts college that in 2007 ranked in U.S. News and World Report’s list of best comprehensive colleges in the South; and Queens University of Charlotte, a private college offering undergraduate and graduate course work in arts and sciences, nursing and business. The city also is home to Central Piedmont Community College, one of the nation’s largest two-year institutions, which serves more than 60,000 students annually and offers high quality corporate and continuing education programs.

From pre-kindergarten to Ph.D. programs, Charlotte offers an abundance of educational opportunities. As a result, Charlotte is a city of educated individuals. We were recently ranked as America’s sixth most literate city based on the percentage of residents holding a high school diploma or greater and the percentage of residents with a bachelor’s degree.

Charlotte is at the heart of a highway and railroad system that stretches across the Eastern and Southern United States. More than 40 percent of the nation’s top 100 trucking companies are located in Charlotte, ranking the city No. 11 in the country. With two major rail systems, Norfolk Southern and CSX, the Charlotte region links to 23 states, making rail service convenient.

In 2007, Charlotte began light rail commuter service with a nearly 10-mile rail line running from the city’s center to its southern edge with seven stations along the way. Plans are in the works to extend commuter service to Charlotte’s north and northeast in coming years. 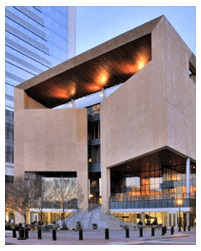 From Picasso to Pavarotti, Charlotte is a city that enjoys and cultivates the arts. Visitors and residents throughout the Charlotte region have easy access to a wide range of visual arts, classical and contemporary music, opera, theater and dance. Charlotte sweetens that blend with several science and history museums to further increase the city’s cultural quality of life.

Charlotte offers cultural activities for every taste, from black tie openings of straight-from-Broadway productions to an evening picnic with music under the stars during the Charlotte Symphony’s Annual Summer Pops series.

Charlotte is home to several museums nationally recognized for their impressive permanent exhibits and the traveling exhibits they attract. Theater events range from Broadway blockbusters to the city’s venerable amateur troupe to its famed Children’s Theatre.

There is always something special going on in Charlotte. From small festivals in the county’s numerous parks to giant downtown street fairs that draw tens of thousands of people, one thing is clear: Charlotte knows how to throw a party — and everyone is always welcome.

Whether residents like to watch sports as fans — or get in the middle of the action themselves, Charlotte is a big league sports town.

This is where the National Football League’s Carolina Panthers and the National Basketball Association’s Charlotte Bobcats play. Each May, The Wachovia Championship brings in the world’s best golfers, including Tiger Woods.

Each winter, fans cheer on the Checkers, Charlotte’s professional hockey team. Each summer, attention shifts to soccer with the Charlotte Eagles, the city’s pro soccer team, and baseball games with the Charlotte Knights. The city is abuzz about prospects of building a downtown baseball stadium. Charlotte is also home to many of NASCAR’s hottest stock car racing teams, the NASCAR Hall of Fame and one of the most-popular NASCAR race tracks.

Fish, boat, camp or leisurely laze away the day on the 847 miles of combined shorelines on Lakes Norman and Wylie and Mountain Island Lake. The new U.S. National Whitewater Center attracts serious kayakers and rafters from around the globe while also giving families a fun way to spend a sunny day. Don’t want to get wet? The center offers a 46-foot tall climbing tower and 30-foot climbing wall, bike rentals to explore the area’s 11 miles of trails and high-adventure ropes courses.

From biking to hiking to boating to just spending an enjoyable day outdoors, Charlotte is the perfect place to be.

TopThere’s a Future for You in Charlotte

Green, growing and great. That’s the clear vision of the people who live here and who strive to keep the soul and character of our city intact.

The quickly developing Queen City is following a carefully designed blueprint created to balance the need for growth with our desire for preservation. We believe growth is essential. But the real future of our city is ever-tied to our quality of life. We invite you to share in this future. In Charlotte.

Get information on the Charlotte region delivered right to your door!